Ice and its meltwater are the most important deposition agent for soil parent material in Canada. The last ice age occurred during the Pleistocene epoch, starting about 2 million years ago and ending about 10,000 years ago. During the ice age, there was a series of glacial advances and retreats. The last glacial advance peaked about 25,000 years ago, and during that time ice covered most of Canada and extended south well into the US.

Glaciers are powerful transportation agents that can move earth material ranging in size from clays to boulders. They act as bulldozers, scraping material underneath them, and conveyor belts, moving material that falls on them. These actions create glacial till type of parent material. 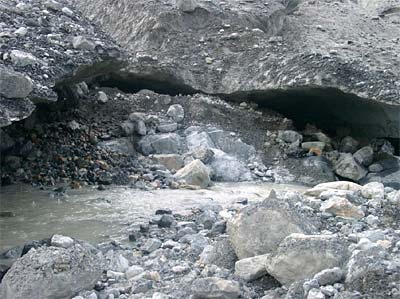 Glacial till deposited at the snout, or the toe, of the Athabasca glacier.

Glacial till deposited at the snout, or the toe, of the Athabasca glacier.