Transport and deposition in water environment produces rounded and well-sorted materials. Rounding is observed on coarse fragments such as gravels or stones, if present, and results from the smoothing of particles’ rough edges by moving water. Water is also a very effective sorting agent, meaning that parent materials deposited by water tend to have a uniform texture (grain size).

The texture of a water-transported parent material can tell us about the characteristics of the water body in which it was deposited, long after the water has dried out. Turbulent mountain streams only deposit very coarse fragments such as rocks and boulders, while all smaller particles are washed downstream. Fast-flowing, but less turbulent waters allow for gravels to settle and form deposits known as river gravel. Sand settles in calm streams, while silts and clays are transported to still water bodies such as lakes to settle. In very calm environments, such as the middle of lakes or the deep ocean, water-deposited materials consist almost exclusively of clays.

Marine parent material is collection of sediments that have been carried by rivers and streams to the ocean and eventually sink to the bottom. Such materials can vary in texture. 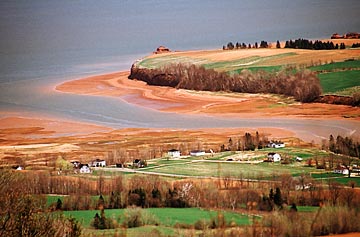