Glacio-lacustrine sediments are deposited by glacial meltwater in lakes. These lakes include ice margin lakes or other types formed from glacial erosion or deposition. Sediments in the bedload and suspended load of meltwater streams are carried into lakes and deposited.

Particles in the suspended load tend to be larger in summer, when glacier melt results in high amounts of turbid meltwater entering the lake. These larger particles settle quickly over the lake bottom. During the winter, freezing temperature reduces discharge of inbound streams and may result in a frozen lake surface. The lake water is very calm and this is when the finer particles settle. This annual cycle of deposition produces layered sediments known as rhythmites. Each annual layer of sediment is called a varve. 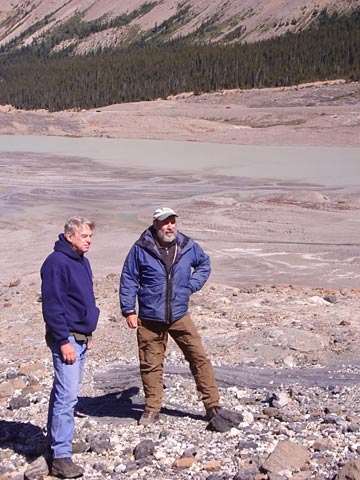 Glacial lake collecting meltwaters of the Athabasca glacier. Note the delta sediments being deposited before the lake.

Glacial lake collecting meltwaters of the Athabasca glacier. Note the delta sediments being deposited before the lake.